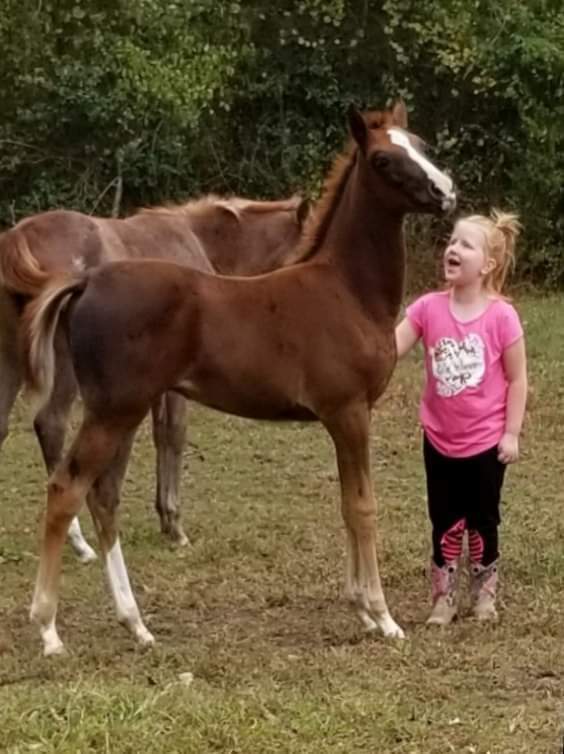 👑BALTIC CROWN OF ESSENCE👑
By LA Baltic Inspiration x Essence Of Roses
☆Born 8.2.19
☆Located Georgetown Delaware
☆A Swedish Warmblood filly
☆’Riley’ at 6 weeks old was registered, approved Swedish Warmblood and branded. Judges commented that “Riley” was very athletic, noble, elegant, and had very balanced gaits (she scored 8s.) Judges highly recommended Riley for eventing. She also screams dressage. She earned an overall 8! She is a very sweet girl loving to be loved. She will turn chocolate chestnut with some white on all 4s. She has correct conformation with a short back, gorgeous neck, small head with a beautiful face. She will be taller than her dam her cannon bones are larger. I am guessing 16.H+. Riley has a jaw dropping off the ground trot. She has charisma, elegance and athletic ability that was handed down from her parentage.
Essence of Roses her dam is a big body Arabian and was SWB broodmare approved. Roses is a multi East Coast Champion in Sport Horse.
Rileys sire 16.2H
LA Baltic Inspiration was the highest scoring SWB stallion in North America. He was also a Star rated and approved ISR/Oldenburg stallion. Inspiration was most influential to the sport horse breeding in North America. LA Baltic Inspiration won the Colt Championship and American Breeders Award at Devon, Champion Stallion, Champion Mature Horse and Reserve Grand Champion in Dressage. He was a Grand Prix Jumper while he competed successfully through Prix St. George’s dressage acquiring many USDF Horse of the Year titles. That same year he was named Champion USDF Fourth Level All Breeds Horse Of The Year. Many of his offspring are Champions his daughter LA Baltic Kharma continues to be the highest scoring mare in North America.
There’s just too many highlights in his career to mention. But his winning Champion of International Jumpers Futurity and Champion Eastern Regional International Jumpers Futurity is worth mentioning. Gail Hoff his owner said He Loved to jump! I will end with him winning American Breeders Award for the Horse Best Representing the Ideals of Sport Horse Breeding in the USA.
☆Riley will be 5 months December weaned in January.
Dont miss out on this rare filly.
‘Riley’ is showing signs of tremendous athletic ability from her sire ‘Inspiration’. She also has his incredible neck. From her dams side she has her grand sire Golden Essence’s beautiful head, strong shoulder, short back and floating trot. She is exquisite!! Riley will stop you in your tracks. She is very balanced and shows a willing to please. A very sweet sweet girl. Follows you every where.
☆ She is also Half Arabian
☆She is USEF Lifetime
☆She will be Micro Chipped
☆
More pictures on Golden Essence facebook page 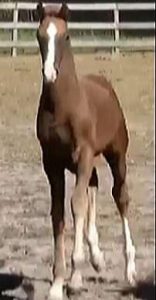 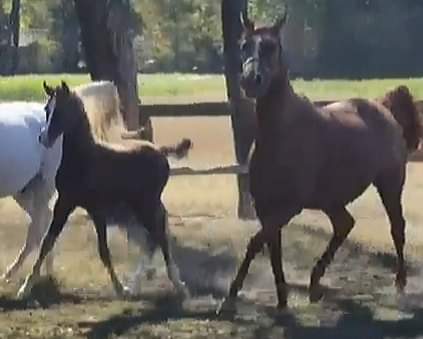